The most effective way any government can find out if it’s moving in the right direction – that is determine if every-day activities contribute to the established long-term priorities – is by continuously tracking and monitoring the impact of its activities.  At its service delivery points – such as a health facility, a livestock market or a vocational center – government staff need to collect data that “monitors” the progress made against specific key performance indicators (KPIs) for the sector. The progress on the KPIs define the effectiveness of the programmes and strategies that sectors adopt to achieve long-term goals.  The same programmes and KPIs appear in sector plans, CIDP, budgets and work plans, simply adjusting the targets to what is realistically achievable in the given timeframe, see example below:

Those in charge of each service delivery point, the department directors and chief officers, the Executive Committee, the Assembly, sector stakeholders and citizens at large need to know if public resources (personnel, equipment and funds) are being used effectively. 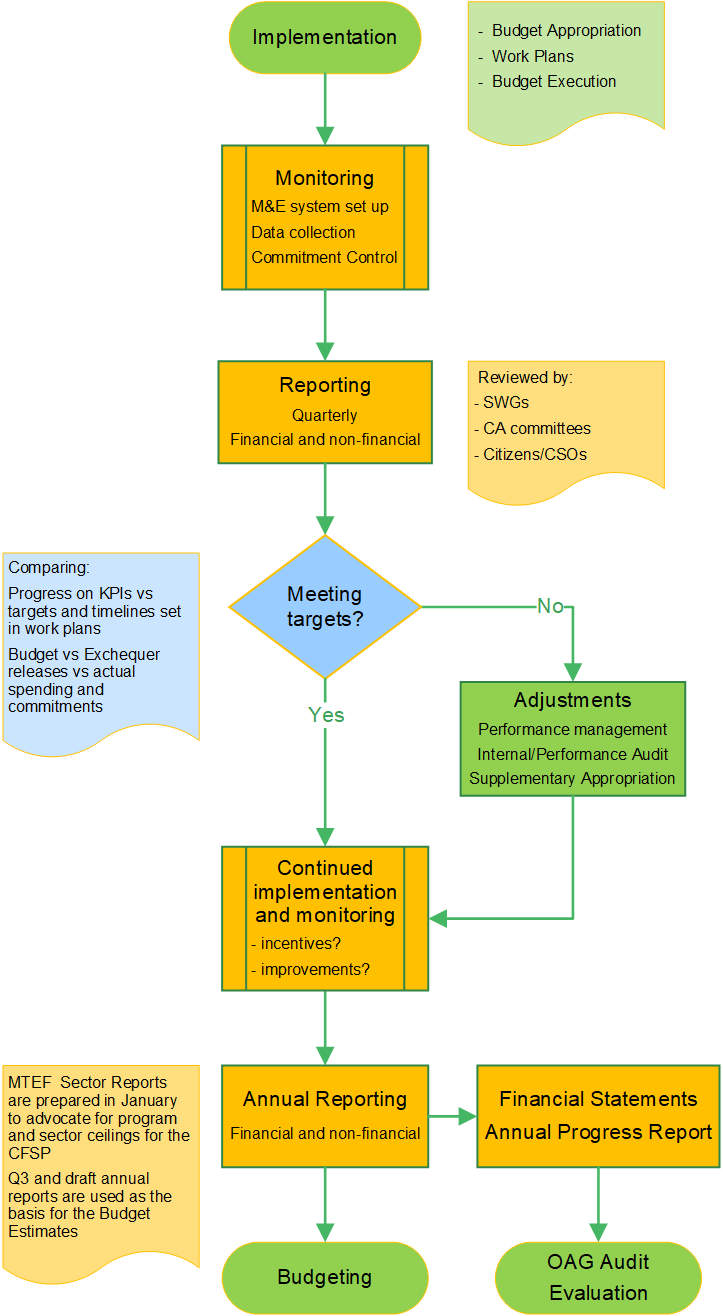 Departments in the County Executive, with the support of the County Finance and Economic Planning, are responsible for preparation of their own M&E plans and process reports, as well as quarterly and annual financial and non-financial reports.  County Finance and Economic Planning is responsible for consolidating the quarterly and annual financial reports for submission to the County Assembly, Controller of Budget and (only for annual reports) the Auditor General.  The County Executive is expected to publicize and make these reports available to the general public.

The County Assembly receives quarterly and annual reports from the County Executive.  These reports are critical in enabling the oversight function of the County Assembly, which will use them to assess county executive performance during the year.  The Assembly can request additional reports to clarify any issues arising from such performance.  Reports are also be used to guide and inform the review and approval of plans and budgets presented by the County Executive.

As with the County Assembly, the citizen’s role is centres around assessing actual performance against plans and budgets.  These reports will also provide useful insights to guide citizens’ inputs to plans and budgets.