A simplified version of the legislative process in county governments can be visualized as follows: 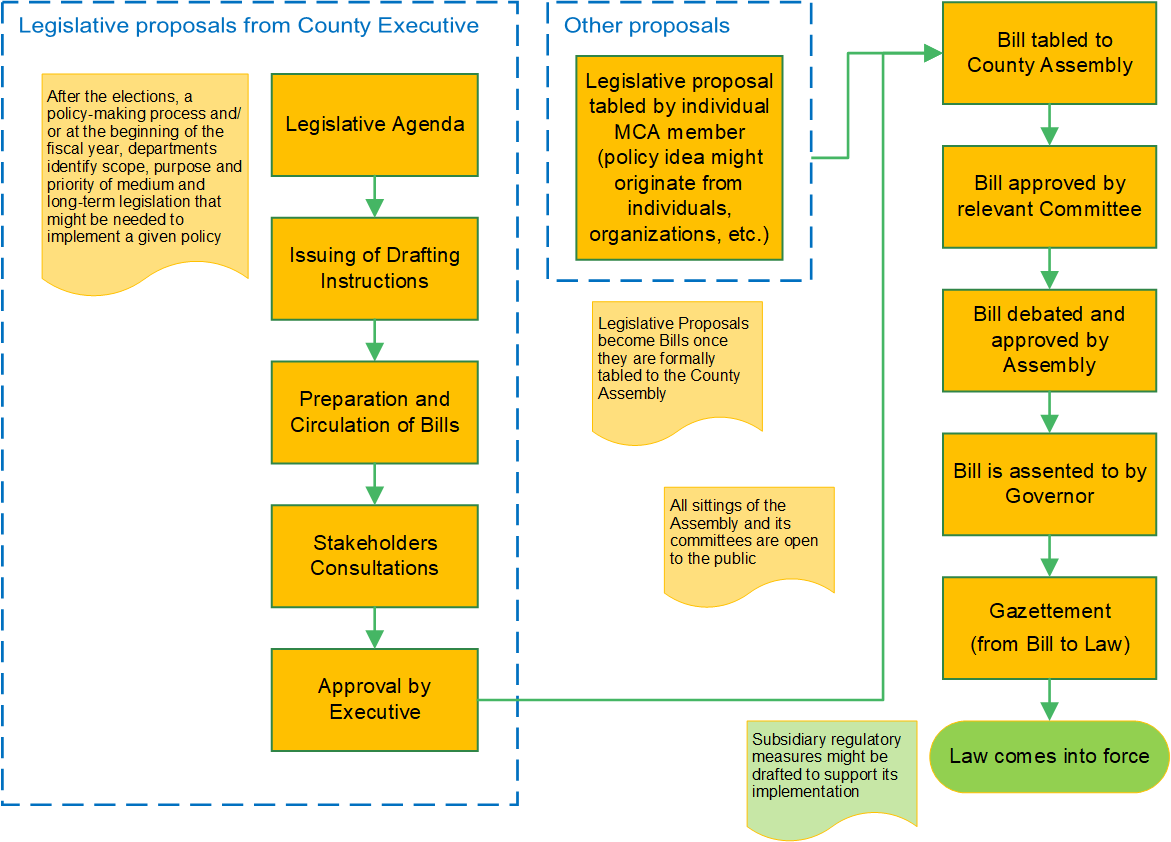 A legislative proposal should always emanate from a public policy, a decision-making process that sets the government’s objectives and the strategy to achieve them. Some policies require only relatively minor administrative or regulatory measures for their implementation, while others require the adoption of new legislation. Even the annual budget, which is a critical means to implement government policies, is converted into law by the County Assembly (appropriation).

Policy ideas and respective legislative proposals may originate from the Executive but also from political parties, business associations, organized groups or even individual citizens.

The decision to proceed with a new legislative process depends on: (i) whether the given policy is self-executing; (ii) the cost-benefit analysis of the proposal; (iii) the existence of similar applicable law and consistency with the constitutional framework; and (iv) whether the issue can only be resolved by way of other legislative initiatives

Legislative drafting is the process of converting policies, pronouncements or declarations into legislative instruments. A legislative drafter is the person who translates the agreed policy framework into a draft bill or legislative proposal that is presented to the Assembly. Drafters should try to reduce the complexity in law and use simple, unequivocal language that impartially captures the substantive and technical matters at hand while considering the practicality of implementation of the law. Drafters should also ensure the bill’s conformity to the letter and spirit of the Constitution and consistency with existing statutes.

Once tabled to the Assembly, a legislative proposal become a bill and undergoes the review of relevant committees, plenary readings and debates in accordance to the Standing Orders, and, once approved, is forwarded to the Governor for her assent. The Governor has fourteen days to assent or refer the bill back to the Assembly requesting specific changes. The Assembly can take those suggestions into account or – with the approval of at least two-thirds of members – re-submit the unchanged bill to the Governor for (now mandatory) assent. Once assented to, the Bill becomes a Law that is published in the county Gazette and Kenya Gazette and comes into force fourteen days after its publication (see also County Government Act, 2012, Art. 21 to 25).

“Money bills”, those proposals that have financial implications on county revenues and/or expenditures follow a slightly different process as they are subject to additional review by both the Assembly committee in charge of finance and the County Executive Committee member responsible for finance.

This page has been adapted from the 2015 publication of the Kenya Law Reform Commission, “A Guide to the Legislative Process in Kenya”.

The Constitution of Kenya, 2010

A Guide to the Legislative Process in Kenya, Kenya Law Reform Commission, 2015.