According to the Constitution (Art. 1), citizens exercise their sovereignty through their elected representatives at the national and county level. At the national level, citizens vote to elect the President of the national executive, a member of the National Assembly representing their constituency (290 constituencies plus special members – 47 women elected and 12 youth/disability/workers reps nominated by political parties) and a member of the National Senate representing their county (47 Senators).

At the county level, the people vote to elect the Governor as head of the county executive and a member of the County Assembly representing their Ward (number of wards varies by county, so does the number of special seat members).

Elected representatives are expected to uphold the national values and principles of governance, which include: (a) patriotism, national unity, sharing and devolution of power, the rule of law, democracy and participation of the people; (b) human dignity, equity, social justice, inclusiveness, equality, human rights, non-discrimination and protection of the marginalised; (c) good governance, integrity, transparency and accountability; and (d) sustainable development (Art. 10).

Article 176 reinforces the principles of sharing and devolution of power by mandating “every county government to decentralise its functions and the provision of its services to the extent that it is efficient and practicable to do so”. The following diagram represents the decentralised structures of counties. 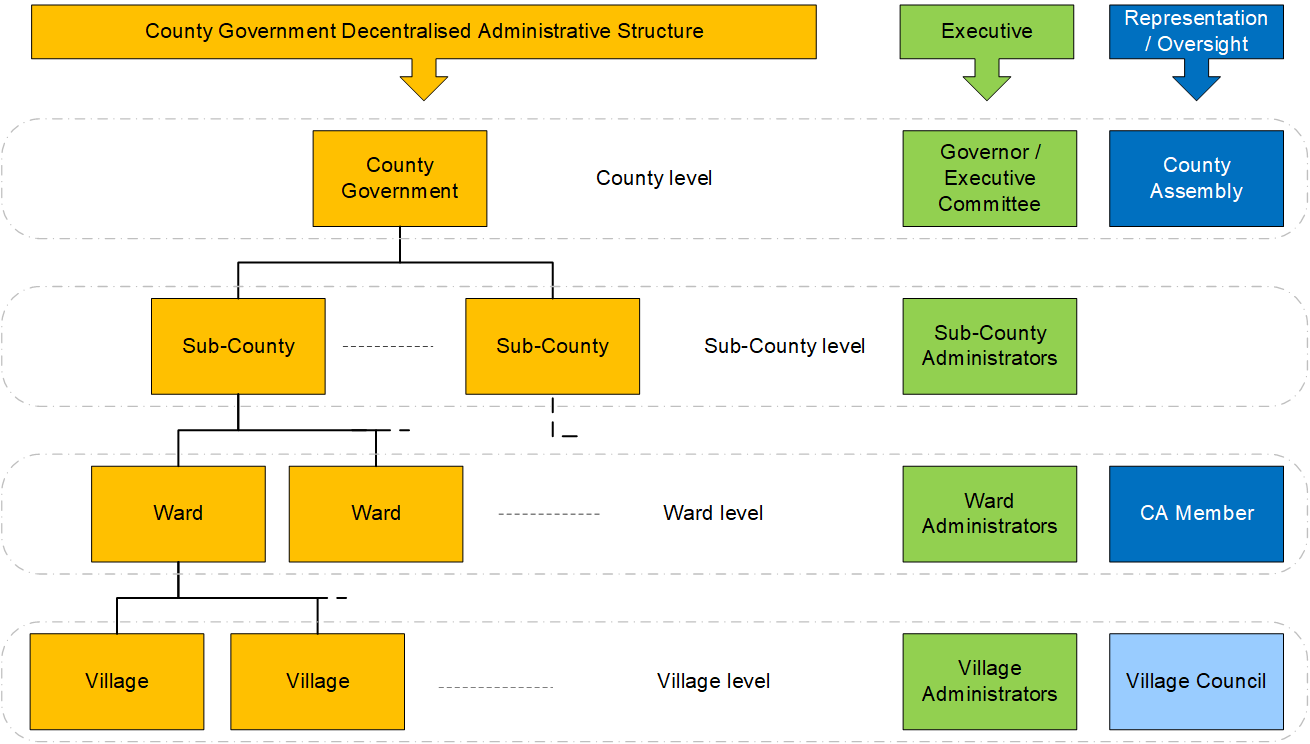 The extent to which service delivery and participation have been effectively decentralised varies greatly across counties.

With the establishment of two levels of government that “are distinct and interdependent and shall conduct their mutual relations on the basis of consultation and cooperation”, the 2010 Constitution brought a seismic shift into government business in Kenya. National Parliament was tasked with regulating the inter-governmental space to ensure successful relationships between the two autonomous levels of government. The Intergovernmental Relations Act of 2012 established the National and County Government coordinating Summit (the Summit), the Intergovernmental Relations Technical Committee (IGRTC), the Council of Governors (COG), and outlined mechanisms for dispute resolution. Other critical bodies and commissions, such as the Commission on Revenue Allocation (CRA), the Office of the Controller of the Budget (COB) and the Intergovernmental Budget and Economic Council (IBEC) were created by the Constitution and other key national legislation such as the Public Finance Management Act, 2012. To read more about these institutions follow link to Inter-governmental Relations Institutions.

Smooth and successful implementation of the devolved system of governance rests on well-defined and functioning relationships between all these institutions under the coordination of the Ministry of Devolution.