Governments generally fund their expenditures through the revenues they collect from residents and additional sources of financing such as grants or loans – the latter primarily used to fund large development projects.

County Governments in Kenya have two main types of revenues, the ones they collect directly from residents – known as Own Source Revenues – and the ones collected at the national level and passed on to Counties as inter-governmental transfers, the largest of which is the “equitable share”. Note that the largest portion of revenue is collected at the national level as it is often easier and more efficient to centralize tax collection (e.g. income tax, import/export duties, VAT), but this does not imply that those revenues “belong” to the national government. In fact, the Constitution mandates that each level of government be assigned the amount of revenues needed to perform their roles and functions.

As shown in this graph, since the inception of devolution, county revenues – hence expenditures – have progressively increased but during the same period the national government revenues and spending have increased at a significantly faster pace. 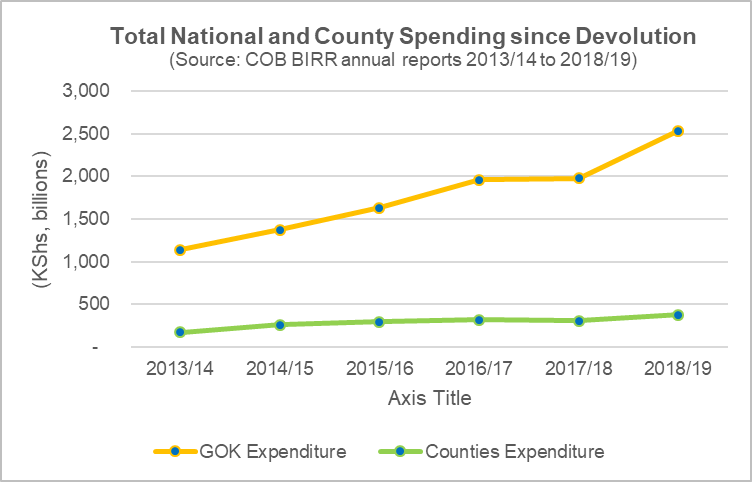 This section briefly looks at the importance of OSR, at the main sources of revenue assigned to counties, their potential as source of government funding, revenue management considerations, and the main risks associated with OSR.

Own source revenues are clearly important for their financial contribution to the functioning of county governments and funding of service delivery. However, they might be even more important for their critical role in strengthening the “social contract” between citizen and government – that is the citizens pay taxes and, in exchange, expect from the government a certain level of services and consideration in making decisions. This is evident in counties when citizens and business groups engage with their counties around market fees or other levies and rates.

In terms of total amounts – see graph below – counties OSR collection has slightly increased since the inception of devolution (blue line with its respective dotted upward trend) but at a pace slower than inflation. As county spending and intergovernmental transfers increased over the years, OSRs declined in real terms and as a proportion of total county revenues (yellow bars). 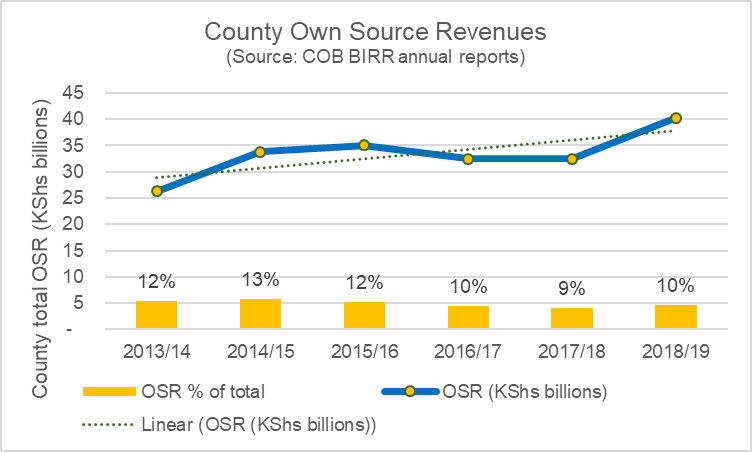 As discussed above, Kenya’s devolution model by design involves a large disparity between the aggregate level of expenditure responsibilities and the own source revenues assigned to county governments. Nonetheless, County Governments should strive to counter the increased reliance on transfers from National Treasury by mobilizing local revenues to their full potential.

Article 209 of the Constitution allows counties to impose property tax, entertainment taxes and any other tax authorised by an Act of Parliament, as well as charges for the services they provide. This is resulting in a varied mix of revenue sources that is not always easy to compare across counties as similar revenues might be classified differently. When preparing a national policy in support of County OSR, the National Treasury compiled and grouped data from all the 47 counties, but a significant portion of revenues was hard to categorise as shown in the graph below

Note also that a handful of counties account for a large share of total OSR collection – most notably Nairobi City County – so the importance of these categories is not equally distributed across counties. For example, in the year depicted in the graph above, Narok County accounted for 70% of the total revenues collected nation-wide under the Natural resources, exploitation and conservancy category. Each county government approves rates and fees annually in the Finance Act, which should accompany the approval of the Budget Estimates and Appropriation Act.

The revenue potential is an estimation of what a revenue source can reasonably generate – that is without disrupting the economy at a reasonable effort and cost of collection. A well-managed Property Tax, based on up-to-date property valuation rolls, is the revenue source with the greatest potential for counties. Other minor sources – that are less reliable and present high collection costs when compared to the actual revenue yield – could be replaced by adding on small percentages to what collected at the national level (so called “piggy backing”). A 2018 study commissioned by the National Treasury and the World Bank found that if all counties would perform as the most effective ones currently do, total OSR collection in Kenyan counties could almost immediately double. The same study identifies a long-term total OSR potential at least four times higher than current levels; it also estimates that – for example – by simply applying a 1% rate on the top 10% highest-valued properties, counties could raise up to Ksh 66 billion, an amount by itself significantly higher than total OSR currently collected (~KSh 40 billion in 2018/19). A 1% rate is definitely too high and 10% of properties is definitely too small as a tax basis but this quick calculation is useful as a reference to indicate the potential of property taxes as a revenue source.

Efforts to standardize revenue collection and management systems in and across counties have been unsuccessful. There is a patchwork of cash and automated systems, utilizing public and private sector actors as collectors. Some collection systems are prone to leakage, others subject to high fees applied by the private sector doing the collection on behalf of the county. The Revenue management systems are also inadequate; the National Treasury found that the all the various systems adopted (either IFMIS, the older LAIFMOS or custom solutions introduced by private developers) are inadequate and recommends to adopt more holistic Enterprise Resource Planning solutions – possibly one system that could be adopted by all 47 counties.

Issues and Risks with OSR

The largest share of county revenue is collected at the national level and transferred to county governments as inter-governmental fiscal transfers. According to Article 202 of the Constitution, revenues raised nationally need to be shared equitably between national and county governments to ensure that both levels of government can perform their functions and that Kenyan citizens get the most out of public resources. Detailed criteria to guide revenue sharing are listed in Article 203.

Some of these transfers take the form of “unconditional grants” – that can be used to fund the general administration of the county government and the performance of its functions, while other grants are “conditional” in the sense that need to be used for a very specific purpose. These transfers are designed to fill the so-called “fiscal gap”, the difference between the revenue raising powers and expenditure responsibilities of counties.

It is worth noting that while total transfers to Counties have increased over the years in absolute terms, they have declined as share of total revenue indicating that Parliament has been giving priority to national government spending when determining the equitable split between national and county levels of government. 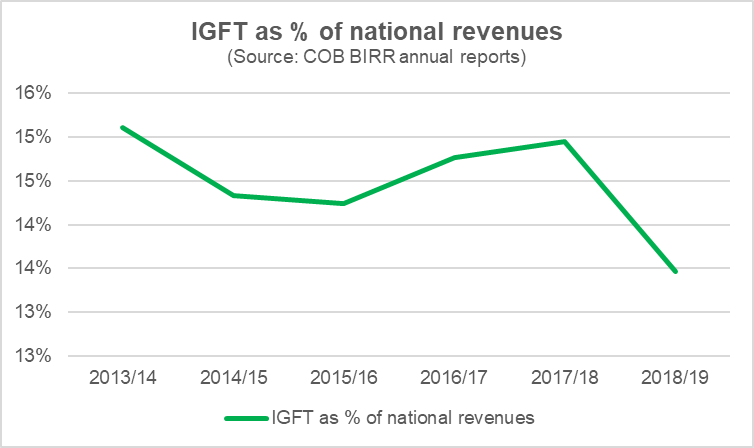 For more information on the “vertical split” of the equitable share of national revenue – the partition between national and county levels of government – please refer to the Recommendation on the Basis for Equitable Sharing of Revenue prepared by the Commission on Revenue Allocation (CRA) yearly and submitted to Parliament in preparation of the Division of Revenue Bill. These papers present criteria and suggestions for the overall size of the larger unconditional grants to counties – the so-called Equitable Share – but also recommendations for existing and/or new conditional grants to target a specific area of services.

If the vertical split is decided yearly by Parliament, the formula that is used for the horizontal split – how the Equitable Share is allocated to individual counties – is revised every five years by the Senate based on recommendations from the CRA. The Commission on Revenue Allocation prepared the Third Basis for Revenue Sharing Among County Governments that is expected to guide county allocations for FYs 2019/20 to 2023/24. This recommendation ties more closely funding allocations to the functions assigned to county governments and the need to address developmental gaps and economic disparities among counties. The formula seeks to enhance the ability of government to provide equitable and proximate service delivery, to create incentives for county governments to adhere to principles of fiscal responsibility and to optimize their capacity to raise own revenue. These objectives are guided by the criteria established in Article 203 of the Constitution.

The Constitution of Kenya, 2010

Recommendation on the basis for equitable sharing of revenue between national and county governments for the financial year 2019/2020. Commission on Revenue Allocation. 2019

Recommendation on the Third Basis for Revenue Sharing Among County Governments, Commission on Revenue Allocation, 2019

Tax Bargaining and the Fiscal Contract - a case study, AHADI, 2019